Following in the footsteps of M K Thyagaraja Bhagavathar, Actor Vikram has sung four out of the six songs in Kanthasamy namely Excuse Me Mr. Kanthasamy, Poda Podi, Kuchi Mittai and Mania in Tamil and Telugu version of the film. 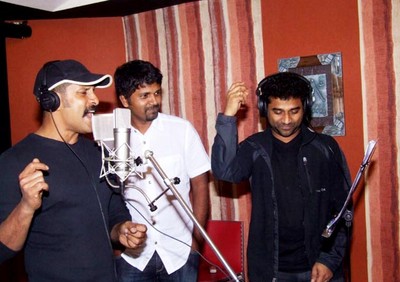 Devi Sri Prasad has done the music. After M K Thyagaraja Bhagavathar, this could be the first time that an actor has voiced for all of his songs in Tamil cinema, accordign to director Susi Ganesan.

How much does the Vikram charge being a star singer?

Vikram has not been singing for money. He has a great voice, We found that there was a good singer in him and somehow convinced him to sing said Devi Sri Prasad

The songs of the movie are expected to be out by the first week of February.