Producer and director Ram Gopal Varma is making a film on the life of forest brigand Veerappan who was was shot dead by the Tamil Nadu Special Task Force (STF) in October 18, 2004.

This film is based on a biography on Veerappan title ‘Veerappan: The Untold Story‘ written by the Mysore-based journalist Sunaad Raghuram. The hunt for Veerappan had gone for decades .

Veerappan’s wife Muthulakshmi flew down to Mumbai recently and met Varma and they reportedly discussed the storyline of the film. There is a good chance that Muthulakshmi would play a part in it.

The film will be directed by Prashant Pandey, who wrote Varma’s latest release ‘Sarkar Raj’ and produced by Ram Gopal Varma and Ekta Kapoor. The film will also tell the story of Veerappan wife Muthulakshmi, the girl who fell in love with the dreaded bandit. 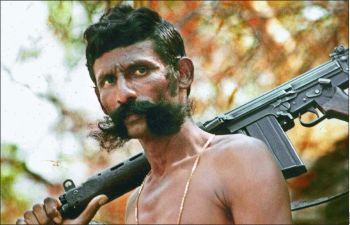