Initially Master Batsman Sachin Ramesh Tendulkar agreed to do one scene in a devotional movie titled Vighnaharta Shri Siddhivinayak, which is directed by Yashwant Ingavale. A devotee of Ganesh, Tendulkar offered to be a part of the project and will not be charging for the role. 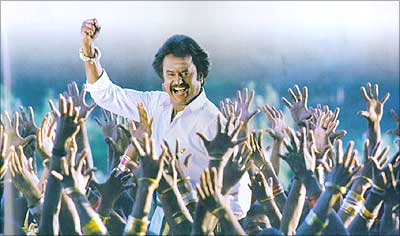 Sachin Tendulkar will performing an aarti in the movie. Bollywod star couple Kajol and Ajay Devgan will also perform aarti and their shoot is done.

Now, Sachin cancelled the plan due to a knee injury, he don’t want to devote time to shoot for the movie. Who is the replacement for Sachin???

Yashwant planed to replace Sachin with Superstar Rajinikanth. Rajinikanth has agreed to be part of the movie and confirmed his dates shoot will take place after September 14, says Yashwant.

This movie is being produced by the Siddhivinayak Temple Trust, which looks after a famous temple dedicated to Ganesh in Mumbai.

Next post: Endhiran(The Robot) Shooting Starts on Sep 8th in US