Actor Poornam Viswanathan, a person with magical voice passed away at the Apollo Hospitals in Chennai on the 1st of October, He was 87. Actor was ill for quite some time and he was admitted in Apollo hospital and was kept under emergency care before he died at 3:30 pm. 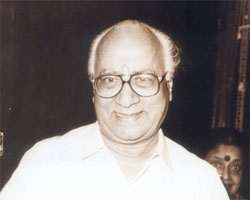 Poornam Viswanathan was with All India Radio Delhi (AIR) from 1947 and was a Tamil newsreader for many years.

At 5.30AM on the morning of August 15, 1947, young Viswanathan became the first Indian to make that external broadcast from All India Radio to East Asia, about India’s freedom to the outside world.

He immediately was noticed for unique way of speech. He is also into films in a big way after his retirement and his various character roles have left a lasting impression on cine lovers.

Poornam Viswanathan, is a legendary stage actor with more than six decades of theatre experience.

Next post: Pyramid Saimira to modernize 250 screens in South India