Past events repeats for director Shankar. First it happened with “Sivaji- The Boss“, now it is for Endhiran. 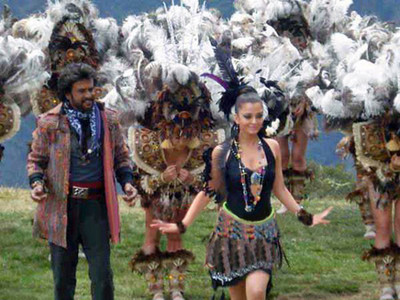 Superstar Rajini’s Enthiran – The Robot on location stills have been leaked. The crew of the Shankar-directed movie shoot a song in Machu Pichu, Peru recently.

The filming of Endhiran has been kept under security but that has not stopped die hard fans to get their sneak peeks. There were total of 5 stills have been released into Peru-based newspapers and all these pictures were published in extramirchi.com too.

Looks like those pictures were shot by a visitor at the shooting spot. The snaps showed a dashing Super Star, dressed up like a cowboy, romancing Aishwarya, dressed up in tribal costume.