Abiyum Naanum the much-awaited film starring Trisha and Prakashraj as daughter and father was held at Kalaignar arangam, Chennai on September 27th. 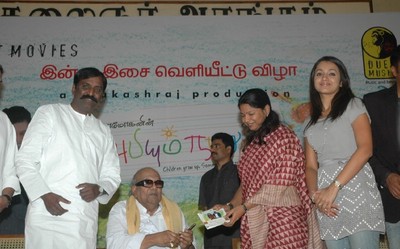 Abhiyum Naanum is jointly produced by Moserbaer and Prakashraj’s Duet Movies, directed by Director Radhamohan. Chief Minister Karunanidhi along with his daughter Kanimozhi launched the CDs and Cassettes and spoke at the function.

To promote the movie a painting competition titled ‘Dad and I‘ is being organized by the Duet Movies which is to be held in Chennai and Coimbatore inviting boys and girls between the ages 4 and 14.