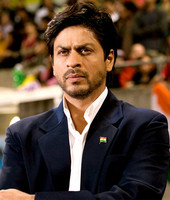 Bollywood superstar Shah Rukh Khan bagged the best actor trophy for his portrayal of a hockey coach in ”Chak De India”, the inspirational sports blockbuster at the V Shantaram Awards held over the weekend in Mumbai.

V Shantaram award is considered very special by the Indian film fraternity due to its unique feature of not being restricted to any particular Indian language.