For those still interested, there is more news coming in from the most glamorous fight in Bollywood.

Shahrukh Khan has finally broken his silence on his fight with Salman during Katrina Kaif’s birthday party. The reason for the fight is that Shahrukh had rejected an offer to star in Salman’s movie. 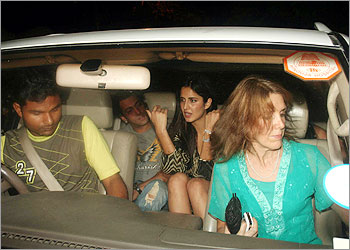 Many speculated that Shahrukh taunted Salman with Aishwarya’s name which left Salman angry and upset during Katrina Kaif’s birthday party.

Salman has asked SRK to star in his home production Main Aur Mrs Khanna. Shahrukh declined the offer as the dates clashed with other long pending fil and Salman who had appeared in SRK’s Om Shanti Om felt cheated when SRK turned him down and the two stars fought.

Previous post: If Vijender Gets GOLD Medal, Bipasha is Ready for Golden Date!