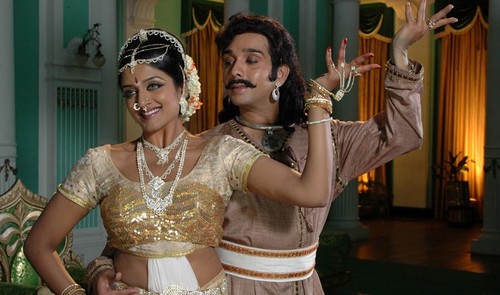 Filmmaker P. Vasu carved a niche winning rave reviews for his Kannada film ‘Aaptha Mithra’, which was later remade in Tamil as ‘Chandramukhi’ (starring Rajinikanth, Nayanthara, Jyothika and Prabhu in lead roles). ‘Aaptha Mitra’ was indeed acclaimed as the best film of this decade as it crossed 300 days at box office.

And now, P. Vasu has finished the film’s sequel ‘Aaptha Rakshaka’ featuring Vishnuvardhan and Vimala Raman in lead roles. Although, the shooting got finished in March, it has taken 8 months for postproduction works.

Says P. Vasu: “This would be the first ever Kannada film to be churned out at a big cost of Rupees 8 Crores. The complete climax will be brimmed with computer generated graphics and stunning visuals.”

‘Aaptha Rakshaka’ will hit screens in January and only after witnessing the film’s results; P. Vasu will start script works for the Tamil remake of this film.