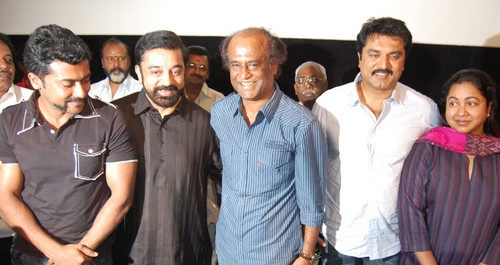 The entire Tamil film industry is appalled with the unofficial release of Jaggubhai over the internet, and now is being distributed in black markets. The actors and other technicians of Tamil film industry had gathered for a meeting expressing their views to curtail the illegal activities that have been threatening them.

It was saddening to witness Director K.S. Ravikumar breaking down in tears as he said, “It nearly took Rs.15 crores to produce this film and involves two years of hard work. But I am not able to withstand the cruel deed of those heartless people.”

Emotionally-bounded Sarath Kumar said that those people could’ve directly shot them to death instead of committing such acts.

Padmashree Kamal Haasan came up with a convincing speech that the public must be made aware- the funds raised through pirated videos are donated for terror attacks. People must think about this twice before purchasing them.

Superstar Rajnikanth made it clear that the councils of Tamil film industry must offer solutions to this issue by implementing strict measures instead of approaching Chief Minister.