Sonia and Shahrukh – 50 Most Powerful People in the World

Congress president Sonia Gandhi and Bollywood superstar Shah Rukh Khan have been ranked among the 50 most powerful people in the world by the Newsweek magazine. President-elect Barack Obama topped the list while Sonia Gandhi is in 17th spot and Shahrukh Khan in 41st spot. 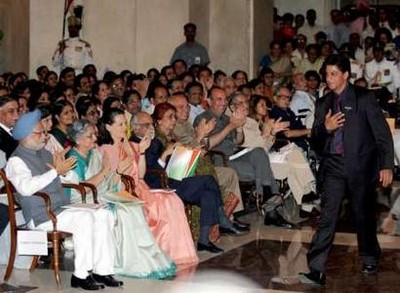 Who is the world’s biggest movie star? Brad? Will? Nah. His name is Shahrukh Khan, and he’s the king of Bollywood. It’s not just that his romantic flicks make gazillions it’s where those gazillions come from.

Here is the full list of 50 most powerful people by Newsweek magazine.