After 30 years, public cinema is back in Saudi Arabia.

“Menahi,” financed and produced by Saudi Prince Waleed bin Talal’s film shingle Rotana, is set to become the first film to be released for public viewing since cinemas were banned by religious clerics in the 1970s. 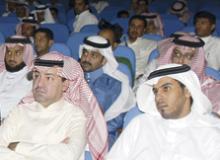 We haven’t had public cinema in Saudi Arabia for 30 years, said one viewer.

Next post: Newsweek – 50 Most Powerful People in the World