Obama Sworn In as the 44th President of USA

Barack Obama took the oath of office today as the 44th president of United States of America .

Today I say to you that the challenges we face are real, Obama told hundreds of thousands of people gathered on the National Mall in front of the Capitol Hill in Washington DC. 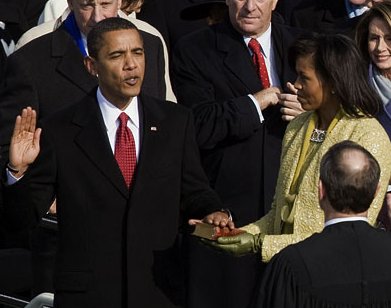 Photo: Obama took the oath as the America’s 44th president

In his inauguration address Obama said,

We come to proclaim an end to the petty grievances and false promises, the recriminations and worn-out dogmas that for far too long have strangled our politics.