It Was Like Riding a Tiger – Confessed Ramalinga Raju

B. Ramalinga Raju, Founder-Chairman of the $2-billion Satyam Computer Services, stepped down admitting to faking financial figures of the company. 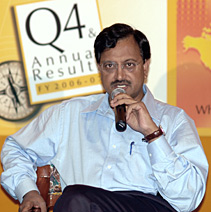 Raju said he inflated the company’s balance sheet by $1.04 billion( Rs 5,040 crore) so that 94 % of assets Satyam claimed were, in fact, fictitious.

Raju said the fraud started years ago and had ballooned to unmanageable proportions as the company grew.

In the confession letter to the Satyam board, he wrote.

Every attempt to eliminate the gap failed. It was like riding a tiger, not knowing how to get off without being eaten.

At least he confessed that he cooked the books.