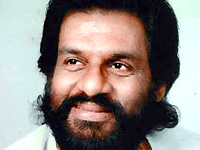 Singer K.J. Yesudas began a cross-country musical campaign against terrorism in Thiruvananthapuram, with the motto “Music For Peace“.

He started “Music For Peace” in the presence of Kavita Karkare, widow of Maharashta Police’s Anti-Terrorism Squad chief Hemant Karkare, who was killed in the recent terrorist attacks in Mumbai. Kavita Karkare handed over the torch to Yesudas to mark the launch of the ‘Sangeetha Yatra‘.

Sangeetha Yatra will cover major cities, including Delhi, Kolkata, Mumbai, Chennai and Bengaluru. As a part of his musical campaign, Yesudas will hold music programmes in various centres in Kerala.