Prabhu’s daughter is to marry her aunt’s son Kunal who is working in UK as a software engineer and the engagement for the same took place in Chennai in Sivaji’s house. 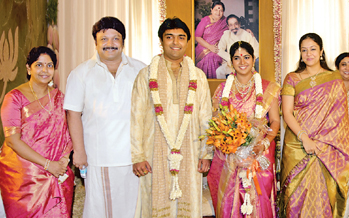 Pic – Actress Jothika with the engaged couples,Prabhu and his wife

Sivaji Ganeshan’s granddaughter Aishwarya had completed her B.Com degree at Chennai Ethiraj College. Kunal is son of Prabhu’s younger sister Thenmozhi, who is a B.E and MBA professional working for a software company at London.

Prabhu’s younger sister Thenmozhi is married to Dr. Govindarajan who is brother of Dr. yanaswamy who has married Prabhu’s elder sister. Prabhu’s son Vikram got married to with Lakshmi Ujjaini last year. Click here for photos.

Actor Kamal Hassan, Ajith, Shalini, Jothika were among the selected invitees who attended the engagement function.