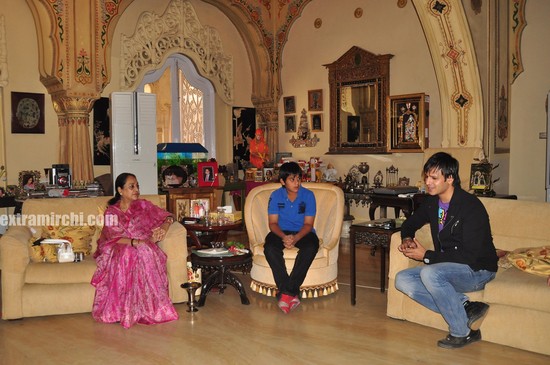 Vivek met the with the Maharani, her daughter Princess Diya and her 12 year old son, Prince Padmanabh Singh of Jaipur. Vivek even taught the young Prince how to whistle, and they discussed Vivek’s alma mater Mayo College, Ajmer.

“We met the royal family of Jaipur while we were in the city. They were extremely gracious and friendly. The young Prince Padmanabh was an absolute charmer. Jaipur is a beautiful city and I would love to go back and shoot there soon” said Kumar Taurani, MD, Tips Industries and producer of Prince, his upcoming film.

The movie Prince is an extreme action thriller directed by Kookie V Gulati and stars Nandana Sen, Aruna Shields and Neeru Singh opposite Vivek Oberoi. The movie is set to release on the 9th of April.