Shilpa on her Wedding – Most exhausting & happiest week of my life 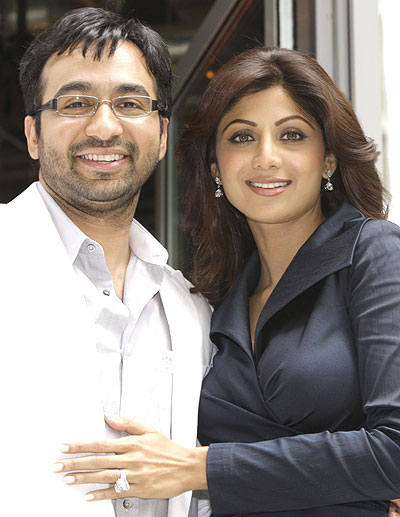 Barely two days after the wedding, and Shilpa Shetty-Kundra, that’s how she wants to be known now, feels she’s on top of the world.

“Thank God, I plan to get married only once! This has been the most exhausting week of my life. And also the happiest. I’ve waited so long for my wedding. Outwardly the only thing that’s different is the chudas (heavy gold bangles) and the way I’m dressed is different. Inside me, everything feels the same. I’ve known Raj so long it feels no different otherwise,” says Shilpa, exhausted after the wedding and reception.

“I’ve a severe jaw ache from all the smiling that I did at the reception on Tuesday. Now I know why my colleagues avoid wedding receptions. It really does get impossible to manage all the crowds.”

Apparently there were more gatecrashers at the reception than guests. “At the wedding too there were people climbing trees and walls to take photographs,” Shilpa giggles. “But it was a far more intimate private and controlled affair than the reception. My sister Shamita kept saying she felt she was part of Punjabi wedding sequence in a movie.”

Laughter dying down Shilpa says soberly, “The wedding was very traditional and simple. I felt I was going through a dream. My marriage was exactly the way I had imagined it.”

Now the couple leaves for their honeymoon followed by a Mediterranean cruise for the entire family.

Says Shilpa happily; “We’re going to the Bahamas for our honeymoon. Then after we return Raj is taking our entire family, all the Shettys’ and Kundras on a Mediterranean cruise for Christmas. He thought everyone needed break.”

Regarding her plans of dividing her time between Mumbai and London Shilpa says, “I’ve to get acquainted with Raj’s circle of friends in London, get used to socializing with them. Yes, we’ll have two homes now. In any case I was always traveling to and fro. Now I’ll be doing this even more. I’ve my film-production company in Mumbai. So I can’t be in London only.”

Motherhood is also on the anvil. “Oh yes! I certainly want to be a mother. I can’t wait to start our family.”