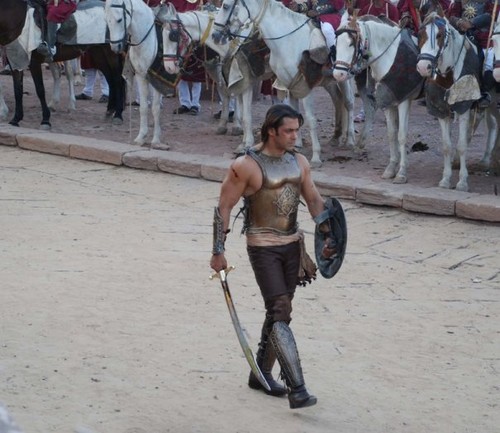 An Eros International worldwide release, produced by Vijay Galani and directed by Anil Sharma, the epic saga stars Salman Khan in a never seen before avatar along with leading lady – newcomer Zarine Khan. Audiences will be treated to a glimpse of the film with the theatrical trailer hitting the silver screen with De Dana Dan on 27th November.

Veer, Salman Khan’s brain child that has lived with the actor for over 20 years is a legend of heroism and bravery of a Pindari soldier. The film is a period drama with the theme of love versus duty. It speaks of bravery exemplifying the courage of every oppressed Indian fighting for justice and independence. The film has been directed by Anil Sharma, a master at big canvas and historical projects.

Adds a source “The film Veer has been a 20 year dream of Salman’s even before his foray into acting. Salman’s involvement in this particular project is tremendous especially since he’s lived with the script for so long. It’s like a dream come true.”

The film also stars veteran actors like Mithun Chakraborty and Jackie Shroff along with Sohail Khan, Bharat Dabolkar in pivotal roles. And new faces Zarine Khan and Lisa Lazarus –Miss UK are the leading ladies of the film.

Reveals the source “Salman has gone all out for this film. He has worked hard on his look for Veer right from the styling to his toned physique. The film has turned out great much to everyone’s delight and is touted as Salman Khan’s greatest work”

Not compromising on the music, Vijay Galani has roped in the unusual combination of musical duo Sajid Wajid for the music and Oscar winner Gulzar for the lyrics. This will be the first time Sajid Wajid will experiment on a historical film.

An esteemed and exciting star cast with Salman Khan in the lead, great music, never seen before cinematography, vast historical landscapes, and a great script – Veer is set to arrive in theatres on January 22, 2010.