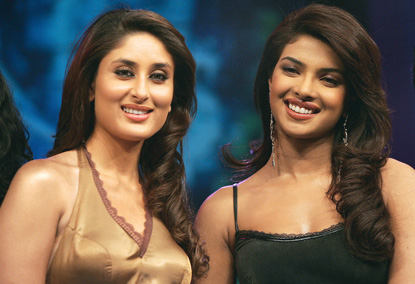 Carrying on the tradition of unfriendly Bollywood actresses, Priyanka Chopra and Kareena Kapoor are battling it out. First, Priyanka zoomed into Kareena’s territory by befriending Shahid Kapoor just a little while after Kareena broke up with him. And now, they’re fighting over Bollywood’s most sought after make-up artist, Pompy.

Both actresses have worked with Pompy on various commercials and films and want him to be the one styling them. When both of them sign a film, they check if Pompy’s dates match theirs. When Priyanka got ready to shoot for ‘Anjaana Anjaani’ with Ranbir Kapoor, she checked if Pompy was available. But he was already scheduled to accompany Kareena to Sydney for the shooting of the remake of Stepmom, starring Kajol and Arjun Rampal with Kareena.

Kareena considers Pompy as family, inviting him to her film previews. Those who attended the Kurbaan preview confirmed Pompy’s presence there.