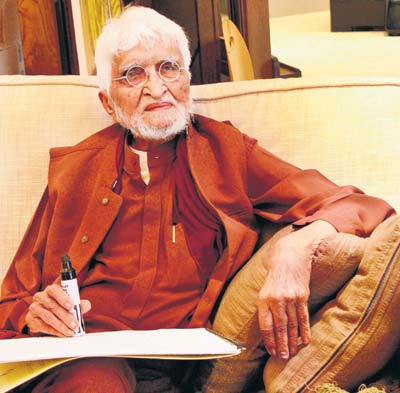 In an interview with the Mumbai tabloid Mid-Day, egendary 94-year-old Indian painter MF Husain criticised many of Bollywood’s best and brightest. He opted for Qatari citizenship, and settled into a new life in Doha.

She’s zero in acting but she is beautiful, not bad.

Phir woh hai… Priyanka Chopra. She’s all about imaging. If she gets a good role, she’s good. People liked her in Fashion and Kaminey but she’s not my type of heroine.

And I wonder why people like Kareena Kapoor. Bilkul matchstick hai. She has come to destroy Saif Ali Khan and go away.

A few days ago, I saw someone called Barbara Mori from Brazil or Mexico. I was horrified! Why cast her (Kites) when so many of our girls are far more beautiful and talented?

There was another girl in that movie… Kites… she looked ghostly. Who was she? asked Husain. Kangna Ranaut? replied interviewer.

Hanh, Kangna had so much white make-up, she looked as if she had applied chalk all over her face. Kites ke baare mein yahan bhi bahut charcha tha”

It’s a third-rate movie. It should be banned. Kuch tuk hi nahin tha. What was your friend Hrithik Roshan doing?’ the artist asked interviewer

Amitabh Bachchan behaving like a schoolboy was supposed to be sweet but I couldn’t take it.

Only Madhuri Dixit. I speak to her on the phone. But see, she wasn’t a typical Bollywood girl even at the height of her popularity. Often, I remember a small scene from Hum Aapke Hain Koun… it is shot by moonlight created in a studio. The way she performs, her total surrender to the camera is what beautiful heroines are about.

For a while, you were quite gung-ho about Amrita Rao. asked the Interviewer.

Sorry, not anymore. I liked her very much in Vivaah. Just one more movie… phir woh bhi khatam ho gayee kya? Maybe she just didn’t find a manager who could guide her career properly.

Of the girls, I’m absolutely bowled over by Vidya Balan. She conveys pure Indianness, feminine, sensual, without making an effort. I was captivated by her in Ishqiya which I saw a dozen times just for her. The film was okay, it had a silly, meaningless title. In Paa, also she was wonderful but I didn’t care for the film much.