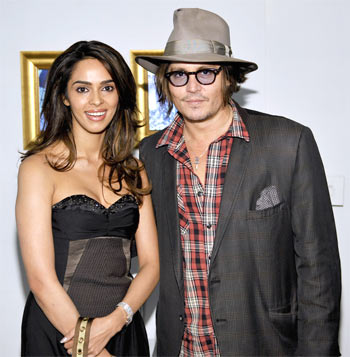 A week after being invited to attend a private affair in Beverly Hills with the likes of Sean Penn, Ben Stiller, Owen Wilson, Charlize Theron, Woody Harrelson and John C. Reilly, Bollywood bombshell (and new Hollywood “It Girl“) Mallika Sherawat was a special guest at legendary crooner Tom Waits’ daughter Kellisimone’s art opening in Santa Monica on Sunday night before being honoured at a private dinner in the Pacific Palisades by industry heavyweights. At the art gallery, Miss Sherawat was seen hobnobbing with American star Johnny Depp, who told the bold beauty that he’s ‘looking forward to seeing ‘Hisss‘.

“It was a great pleasure meeting one of America’s greatest actors. He’s even better looking in person and to top it all, he told me that he is really looking forward to watching the Hisss trailer. I’m sure it’ll give him sleepless nights!”

Also seen with Miss Sherawat at the art opening was Hollywood studio director Jesse Dylan who is developing another new mainstream commercial American film for the Indian star.

Previous post: Gayathri Raguram files for divorce from US husband