Someone up there is sure smiling on Bollywood. For it has given the B town a budding star in Luv Sinha, who debuts with Raj Kanwar’s ‘Sadiyaan’ on April 2. And that someone up there has made sure that the film will be a special treat what with Hema Malini and Rekha also acting in it along side Luv! Of course, Luv is maha excited about this opportunity and thanks God for this honor. 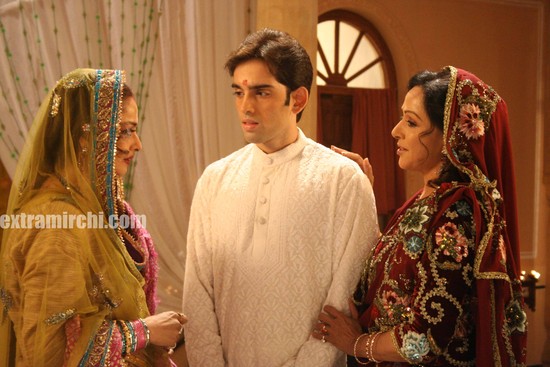 Not just Luv but also director Raj Kanwar is happy to have the two beauties in his film and admits that Luv is very fortunate that these two actresses are working with him right in his debut. What makes Luv more special is the fact that he did not have to pull any filmi strings to enter the industry. Raj Kanwar reveals that he was looking for someone to cast in this film and when he saw Luv at a restaurant, he felt the young boy had a star quality. It was only later that he found out that he is none other than Shatrughan Sinha’s son!

Both the ladies, Hema Malini and Rekha also take immense pride in Luv’s debut. Hema plays Luv’s mother in the film and says that Luv was born in front of her. She has fond memories of rushing to the hospital to see him and his brother Kush when they were born. Thereafter too, Luv was a regular part of her life as he would come to play with her daughters Esha and Ahana. So it was easy to essay the role of mother and son as she thinks of Luv as her own son. On her part, Rekha, too, is equally happy about working with Luv. She has too seen him growing and he is a part of her extended film family. She acknowldges the fact that he has worked very hard on the film and is sure that he would continue to do so in the future as well. Other than his own mehnat, Rekha gives credit to Shatrughan and Punam Sinha for being great and caring paren