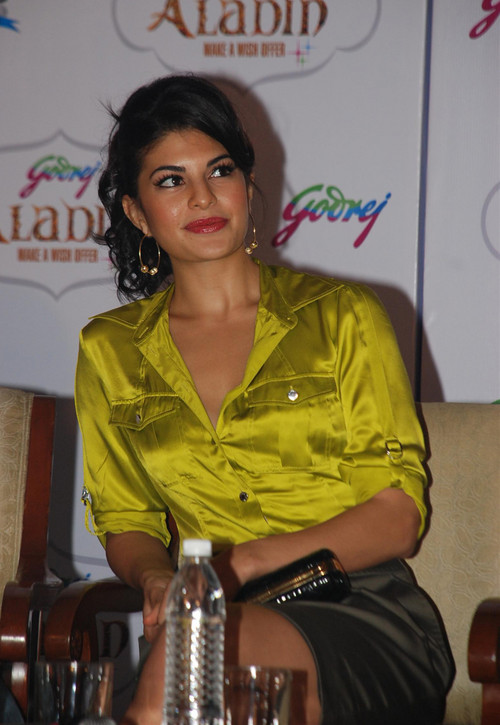 JACQUELINE FERNANDEZ, who is making her debut as an actor with Aladin, tells JYOTHI VENKATESH that Katrina Kaif is not what she is today just because of Salman Khan

How would you describe your role in Aladin?

I play the role of a very sweet and normal college girl called Jasmine in Aladin. She is not a princess like in the fable. Jasmine is not some one who has a distinct personality. Jasmine possesses the qualities of a princess in a fairy tale, though she is not a princess in Aladin. I did feel a little bit of pressure because people know who Jasmine is and I’d have to live up to the expectations. Luckily I had no comparisons. I had to set a standard for Jasmine. That way it was a challenge for me.

Do you think it has been very easy for you to bag your break?

To be honest, I have been extremely lucky. I think I have my own genie who has granted me my wishes. There are many talented young girls who find it very difficult to get a break in Bollywood. I am indeed because within just a month of my coming to Mumbai, I succeeded in getting my big break and now have my foot in the door

How did you bag Aladin?

I did go for an audition for Aladin. I should confess that it was my first and worst audition. In fact, I thought that it would be the last time that I had faced the camera. I messed up my lines and giggled. The casting director asked me to talk about a happy and sad event in my life. I guess I sounded true when I narrated my sad moment, because I tried to be true to the character. I was told that I was on board the film the same evening.

How did you prepare for your part?

The brief that I got from director Sujoy Ghosh was that I should not try to get too much into my character but just be natural. I do not think I prepared for the role. I prepared for the scenes, read the script many times day and night and did the rehearsals.

Considering that you are a Sri Lankan national, how were you influenced by Bollywood?

It may sound clichéd, but the fact is that right from the age of 7, I wanted to be an actress. I should confess that I have been influenced a lot by Bollywood, because I used to make it a point to watch all Bollywood films, in addition to International films, since Sri Lankan films were never shown in Bahrain. I grew up in Bahrain and moved to Panipitiya outside Colombo, where my parents stay, after schooling

How would you compare Bollywood with Hollywood?

I do not know how to compare Bollywood with Hollywood. All that I can say is that I chose to make my debut in Bollywood with a film like Aladin. Bollywood stands on its own with its different way of sending out message to the public. In terms of emotions, acting is difficult. Bollywood is a little more emotional than Hollywood because the actors are blessed here to have the chance to let themselves loose and touch the hearts of the people.

How was the experience of sharing the screen with an actor like Amitabh Bachchan?

Just to be in the same frame as Mr Amitabh Bachchan was more than what I could have asked for. Riteish told me that he had spent his entire life to be with Mr Bachchan, whereas I was lucky to have had the opportunity to be withy him in my very first film. Mr Bachchan has been my source of inspiration from day one, because I learnt by being in his orbit. Mr Bachchan is very polite and kind but probably opens up only when he knows a person better.

Are you scared that you may be slotted as a foreign actress?

I am scared but, I hope that I am not slotted because I want to be different. If you are just perceived as a foreigner, you tend to get limited chance because there will be the tendency to cast you as a NRI or a modern day woman. It is always a big challenge for an actor to essay different roles.

To what extent, are you game for exposure as an actress?

I think there is a very fine thin line between exposure and over exposure. You, as an actor have to judge what suits you. I have absolutely no problem at all as far as exposure is concerned, if it justifies the role. In that case, I would be ready to do what it takes to take the message to the audiences.

How did you find Sujoy Ghosh as a director?

Sujoy is wonderful. I love the relationship that he shares with his actors. I love his spirit and the positivity which he brings on the sets. What I like about him as a director is that he does not at all shout and is very relaxed. His nature rubs off on his actors and brings life to the sets.

Do you think Katrina has set the trend of foreign actresses making it big in Bollywood?

Yes. Katrina has proved every one wrong by being an example of a hard working woman who is dedicated and passionate to her work. I do not think she is today what she is just because of Salman Khan. It will be unfair to attribute her success to Salman Khan. Why would a director invest millions of rupees for the sake of Salman Khan in Katrina? Kat brings in so much into the table.

What is your role in Jaane Kahan Se Aaye Ho Tum?

I play the role of an alien in Jaane Kahan Se Aaye Ho Tum. I come from Venus and crash land into Riteish’s arms. It is a very sweet story. I play a girl who comes in search of true love. Since Riteish also has been in search of true love all his life in the film, together we set out on our crazy journey to find out love.

Have you found out your true love in life?

All that I can state is life is too spontaneous to be able to make a plan and hence I take life as it comes along.