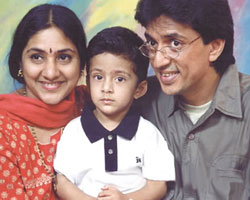 The most loved villain of Tamil Cinema, Actor Raghuvaran died at a private nursing home in Chetpet on Wednesday. He was admitted in the intensive medical care unit of Mehta hospital for the past few weeks.

Raghuvaran, 59, was survived by his ex-wife Rohini and 8-year-old son Sai Rishi. He was 59 years old and has acted in several Tamil, Malyalam, Telgu and Hindi movies.

He had acted with all top actors, including superstar Rajnikanth and Kamal Hassan.

He married actress Rohini, due to misunderstandings between him and his actress wife, the court gave them divorce. However, Raghuvaran used to frequent Rohini?s house and Rohini was also visiting his house with her son.

On hearing the death news , actress Rohini visited the house of Raghuvaran. She wanted the body of Raghuvaran to be handed over to her for cremation.

His funeral will be held this evening, family sources said.