Sridevi all set to comeback ! 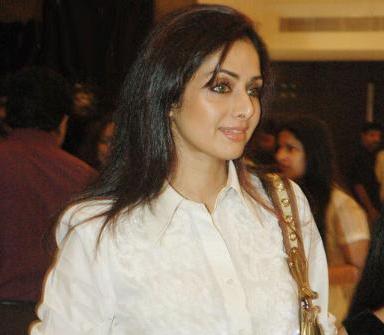 Sridevi, the sizzling diva of the 1980s(40 plus, and still hot!) is all set to make her comeback with hubby Boney Kapoor’s movie. Married to producer Boney Kapoor and the mother of two daughters, Sridevi will soon be sizzling in Boney Kapoo film itself.

Confirming the news, Boney said: “We’re certainly putting together a project that will hopefully do full justice to Sri’s comeback. I’m aware her fans haven’t changed their loyalties.”

Madhuri Dixit, who at one time was Sridevi’s closest competitor, is made her comeback with the film Aaja Nachl. Earlier heroines who guaranteed a box-office opening were Sridevi and Madhuri Dixit, who drew the crowds even when they were cast opposite insignificant actors.

In her early days, Sridevi acted with all the big names in the south ? Sivaji Ganesan, Rajinikanth and Kamal Haasan. She was an actress who could never overshadowed by her male counterparts in all her movies.