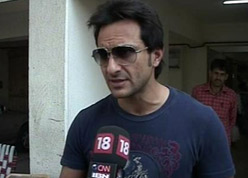 Bollywood actor Saif Ali Khan has denied reports that he and Kareena Kapoor got married in the presence of a cleric.

“First of all, I would just like to say it media reports are rubbish, completely untrue. We are not married, we are not engaged and we are not living together,” Saif Ali Khan told CNN-IBN.

Saif Ali Khan entered into a relationship with the 27-year-old actress Kareena Kapoor about four months ago after she split with Actor Shahid Kapoor.