Pawan Kalyan and Renu Desai Got Married – At Last!

On Wednesday, Pawan Kalyan the younger brother of Praja Rajyam Party Chief Chiranjeevi and his long-time companion Renu Desa made it official in front of their closest friends and family at his residence. 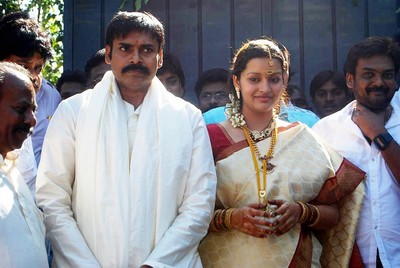 Pawan got officially married to Renu at his Jubilee hills house at 9.50 AM on Jan 28 at simple ceremony as per Arya Samaj rituals.

Renu Desai was the heroine in two of Kalyan’s films namely Badri and Johnny.

Kalyan and Renu Desai had been staying together for about 7 years now and have a 2 year old son Akira. Pawan Kalyan was earlier married to Nandini from whom he got a divorce in 2008. Kalyan heading the Praja Rajyam’s youth wing Yuva Rajyam.

Chiranjeevi, his elder brother Nagendra Babu, Allu Arvind, Puri Jagannath and other members of the family along with few close friends had attended the ceremony.

Previous post: “This is Reality” – SRK on Slumdog Millionaire Poverty