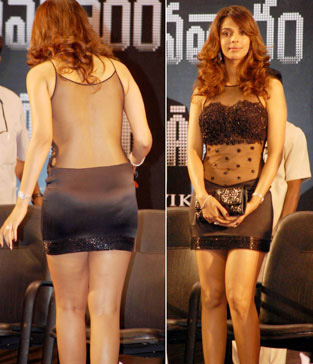 First Khushboo, then Shriya Saran’s short dress hue and cry at a Sivaji function, now it is turn to bombshell Mallika Sherawat to face attacks from the so-called guardians of Tamil culture over improper attire at a film function.

Secretary of the Hindu Makkal Katchi (HMK), S R Kaniraj has filed a compliant at the Periampet police station, claiming that the actress wore a transparent, skimpy and revealing dress at the Dasavatharam audio launch function, which held at Nehru stadium in the presence of Jackie Chan and Tamil Nadu CM.

In his compliant he said, by wearing a mini skirt and exposing her back, she had caused ‘mental agony to the people of Tamil Nadu.

Also, by sitting cross legged on the dais where the Chief Minister was also seated, she had behaved disrespectfully and exposed herself indecently.

Shriya Saran had swiftly tendered apology for wearing short dress at celebrations of the film Sivaji: The Boss, and claimed that she had come straight from a film shoot.

In Nov 2007, the same political party had raised cry over a photograph of actress Khushboo caught seated with her slippers in front of an idol of Hindu deities at a film ‘muhurat.’

Mallika is known for her public openness, she is frequently featured in the world media as a sex symbol. Do you think she will care about these kind of complaints ?