Bollywood’s ‘Dream Girl’ Hema Malini born on October 16, 1948 is turning 60 today. She is young at heart, ruled Bollywood film industry for more than 15 Years is still growing stronger with every year. She is one of the most successful female filmstars in the history of Bollywood. 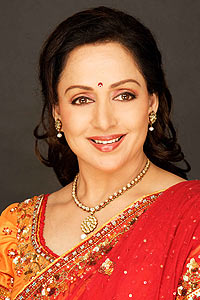 I feel 16 at 60. I guess age has nothing to do with creativity, but it certainly has a lot to do with maturity and dedication.

Hema Malini R. Chakravarty was born October 16, 1948 in Ammankudi, Tiruchirapalli district, Tamil Nadu to, V.S.R. Chakravarty and Jaya Chakravarthy (Iyengar Brahmin) who was a film producer. Her Mother Tongue is Tamil. Her mother, Shrimati Jaya Chakravarty, died on June 11, 2004 due to gangrene on her leg.