Actress Sangeetha and singer Krish to Marry in Tirupati

Initially they both denied reports of their Love affair , now Actress Sangeetha and playback singer Krish has finally announced that they are getting married at the Tirupathi temple on February 1 at a grand function in which members of both the families would take part. 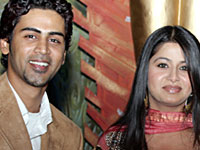 Krish, who had sung several hit songs in movies including ‘Unnale Unnale’, was reportedly dating Sangeetha for awhile