Actually when we read several news stories about Tamil actor Vijay’s political entry, we thought it’s just gossip. But, it turns to be true. 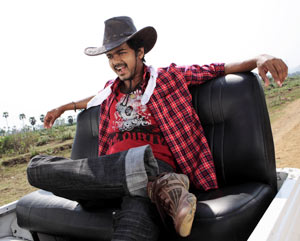 Ilayathalapathy Vijay, 3rd most popular star in Tamil Nadu after Superstar Rajinikanth and Kamal Hassan has publicly admitted that he is serious about plunging into politics, but has not disclosed the date for that.

In a press statement according to sify, Vijay said,

Yes, I was serious about plunging into politics. My greatest strength is my fans who have always supported me through thick and thin. I have about 37, 000 fan clubs spread across Tamil Nadu who are doing social work. I want to do more for the society and that is why I wanted to enter politics. But for the time being, I have no plans to launch a political party or get actively involved in politics. 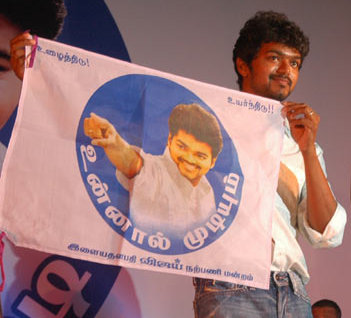 Keeping his political aspiration, last year he launched a flag for his fan club (even glam queen Nayanthara was present).

Do you favour Vijay’s move in this direction ?