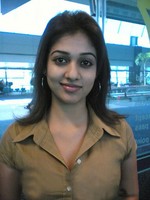 Nayantara born as Diana Kurien on November 18th, 1984 in Thiruvalla town of Kerala is a gorgeous , talented South Indian actress and a renowned ex-model, who won the Best Model Award of Kerala in 2002, celebrates her birthday today.

“Manasinakkare” is a Malayalam film directed by Sathyan Anthikkad in which she paired opposite to Jayaram . The film was a great hit in Kerala. This paved the way for her entry into Tamil Cinema and later in Telugu. She paired with Rajnikanth in the blockbuster movie “Chandramukhi” {2005}. Her later films are Natturaajavu (Malayalam), Thaskaraveeran(Malayalam), Vallavan (Tamil), Gajini(Tamil), Yogi (Telugu), Tulasi (Telugu)etc… Nayantara is happy to have starred in Rajnikanth?s “Shivaji” in an item number. She is now busy in Tamil & Telugu film industry.

Her upcoming Tamil movie is ‘Billa‘ with Ajit.. Here is the Exclusive Billa Photo Gallery

We wish the gorgeous beauty a very a happy birthday on behalf of eXtraMirchi.com Fans!.