Pongal 2010 turns to be the most happening occasion for all the entertainment buffs. The spotlights are on the big releases with loads of entertainment to offer for the small screen viewers too. 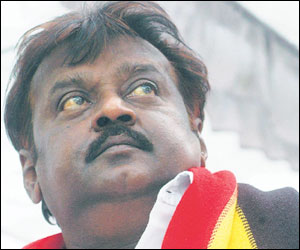 Actor Vijayakanth is all set to launch his Captain TV by Pongal 2010 and he’s actively working on the preplanning phase. Vijayakanth, as we know is already juggling between acting and politics and now has his hands full with a television channel as well.

The actor is in talks with professionals of leading satellite channels to be part of this channel as executives. Vijayakanth is very clear on what he wants on his channel, insisting on not having spoof shows of films he wants politics to be given prominence with no daily soaps.