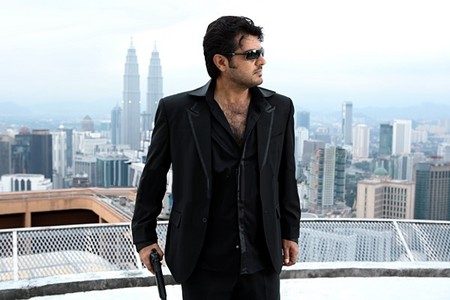 It is official , Ajith himself announced in a press meet that remake of yesterday blockbuster ‘Billa’ will hit the theaters on December 14, 2007.

The remake of Amitabh Bachchan’s ‘Don’ as Billa established Rajinikanth as the superstar in the 1980’s. Now Billa has a makeover by ultimate star Ajith, with the blessings of Rajinikanth himself.

Ajith starrer Billa, Directed by Vishnuvardhan and produced by L. Suresh, ? son of Balaji who produced the yesteryear ?Billa?, the film has Nayanthara, Namitha, Prabhu and Rahman.

Major portion of the film was shot in Malaysia with the introduction song of Ajith was picturised in front of the renowned Murugan temple.

“It’s like a childhood dream coming true. We have grown watching Rajini sir. And donning one of his roles is a humbling experience,” said Ajith.

Will Ajith’s Billa outbeat the original Rajini’s Billa ? Well, Thala fans have to wait till December 14 to find out.

Next post: Ilaya Thalapathy Vijay – I won’t smoke in screens