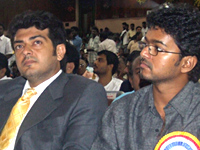 Ajith arranged a special show to his close friends and stars. `Ilayathalapathy` Vijay and his wife Sangeetha, Surya and his brother Karthi were few of the elite guests watched special Billa show hosted by Ajit and his wife Shalini at premiere preview theatre Four Frames.

After the superstar?s hit Sivaji? Billa, the remake of the 1980 Rajinikanth starer with Ajith in the lead, is billed as one of the biggest releases in South Indian cinema in recent times.