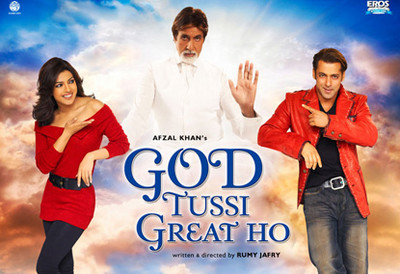 God Tussi Great Ho is comedy film, written and directed by Rumi Jaffery and starring Salman Khan, Amitabh Bachchan, and Priyanka Chopra. It is a remake of the 2003 American film Bruce Almighty. Where Amitabh plays as a God.

Those who saw the movie told the authorities they were shocked to find that Amitabh Bachchan played the role of “God“.

According to Khaleej Times –On Sunday, the National Media Council (NMC) withdrew the movie, which was released in India and in the UAE last week. The NMC decision followed several complaints from viewers that the movie violated Islamic teachings.

“Such films should not be released anywhere in the world because they are not only against Islamic teachings, but are against the teachings of all heavenly religions,” the Mufti said.