Shobhan died during a storytelling session with Bhumika 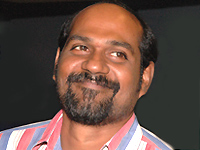 Director Shoban (40) today died of heart attack. Shoban approached Bhumika for a Kannada film at her residence in Hyderabad,and suffered a cardiac arrest.

Bhumika and her husband Bharat Takur rushed him to Image Hospitals in Madhapur, where he was declared dead.

Shoban made his directorial debut with Mahesh Babu starrer Bobby. He is survived by a wife Soujanya and two sons. Shoban was known for his able hand in scripting.

Next post: Nayantara says – No French Kissing scent in Sathyam