Shah Rukh Khan who is shooting for Billoo Barber in Pollachi, 40 kilometres from Coimbatore, is drawing crowds of fans and creating a frenzy. Billoo Barber is a remake of Malayalam hit Katha parayumbol, which was recently remade in Tamil as Kuselan with Rajnikanth. 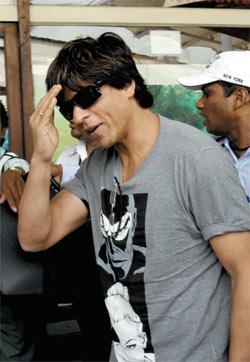 People from Kochi, Trichur, Bangalore and Coimbatore have been coming to catch a glimpse of King Khan.

Nearly 100 policemen and a dozen of his personal security men are providing him security. The entire top floor of Sakthi hotel, where he is staying, has been converted into his personal suite, with special state-of-the-art security gadgets being used. 20 bulletproof vehicles have been flown in from Mumbai for the star and his personal entourage.