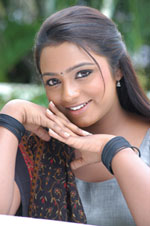 Saranya(23) Bagyaraj, one of the upcoming Tamil actresses and daughter of veteran actor-director K. Bagyaraj’s and actress Poornima, allegedly attempted to commit suicide on Monday night by consuming poison. She was admitted to Malar hospital in Adyar, Chennai.

Saranya made her debut in a Tamil movie Paarijatam, opposite Prithviraj, which was a moderate hit.

Sources close to Saranya, like her friends say that the chirpy girl was going through a bout of depression for the last few months during which she attempted suicide three times.