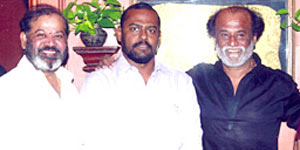 Superstar Rajinikanth has confirmed that he will appear in movie Kuselan, just what Mammootty has done in the original. Superstar will be a part of Kuselan ?without diluting the spirit of the Malayalam original in any way?.

It is now clear that we cannot expect superstar in the introduction song or stylish fight, as in his other movie or have more duets with a young heroine!.

Yes, it is going to be a ‘sad’ news for the die hard fans of Superstar.