A Hollywood movie version of the comic sci-fi series Ramayan 3392 AD, is on the way!.

Ramayan 3392 A.D. is a comic book series published by Virgin Comics based upon the Ramayana. The story primarily deals with the last kingdom of humans who are fighting demons (Asuras) to survive. The sci-fi series is a graphic novel created by self-help and spirituality guru Deepak Chopra and filmmaker Shekhar Kapoor, in 2001. 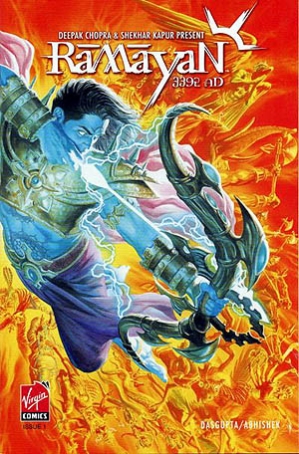 Now, Liquid Comics and Mandalay Pictures have teamed up to bring up Hollywood version of comic sci-fi series Ramayan 3392 AD to the big screen.

The Ramayan 3392 AD Hollywood movie adaptation will be produced by Mark Canton, who has earlier produced 300 and Land of the Dead. Sharad Devarajan and Deepak Chopra’s son, Gotham Chopra, will be the executive producers of Ramayan 3392 AD, with Atmosphere Entertainment.

Mark Canton, who has earlier produced 300 and Land of the Dead will produce with Mandalay Pictures, while Liquid exectuvies Deepak Chopra’s son, Gotham Chopra and Sharad Devarajan will executive produce the film with Atmosphere Entertainment.

Next post: Nagarjuna with son Naga Chaitanya and wife Amala