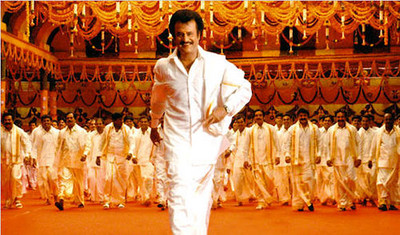 The magic of Superstar Rajinikanth was so empowering. Sivaji – The Boss pulled people to the theatres in Mumbai even without sub-titles. Now the Superstar is weaving his magic with his previous movie blockbuster CHANDRAMUKHI.(2005)

Chandramukhi has already been remade in Hindi with the title Bhool Bhulaiyaa starred Akshaya Kuma. The only difference here being that instead of Tamil, the film is in its dubbed Hindi version. The title of the film has been retained as CHANDRAMUKHI.
Released in 2005, Chandramukhi directed by P Vasu had turned out to be the biggest success story ever of Rajnikanth’s career.