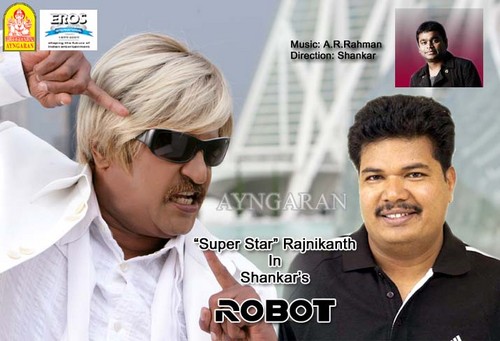 Ayngaran International and Eros Multimedia are happy to announce that Super Star Rajnikanth and Showman of Indian Cinema Shankar along with the Mozart of Music A. R. Rahman are coming together once again after the success of Sivaji in our new film titled Robot. It will be a grand and entertaining film ever made in Indian cinema and will be produced in Tamil, Hindi, Telugu and other languages. It will be a high-tech film with state of art technology. Director Shankar is at the moment finalizing all the other technicians for the film which will be announced shortly.

Eros International is an established global player in the fast-growing Indian media and entertainment arena and produces and commissions films like studios and distributes and exploits films across formats globally via cinemas, home entertainment, television formats and new media. It has built a successful business model around the release of 30 new films every year and has film library containing more than 1,300 titles, making it one of the largest content owners in the business.

Eros has the film distribution rights for the best Indian films like “Devdas“, “Om Shanti Om“, “Munna bhai MBBS“, “Partner” and many others. Global Distribution, Motion Pictures, Music, Home Entertainment, e-Television, New Media and Animation are the main Strategic Business Units of Eros. Currently almost 70 films are being produced and co-produced in Hindi with leading artists such as Shahrukh Khan and Hrithik Roshan.

Ayngaran has been the pioneers in Tamil Film Distribution in theatrical and home video formats in the International Market. The History of Ayngaran business dates back to 1987 when it had the vision to acquire the International Rights across formats of many Tamil films that became blockbusters.

The much-awaited animation film ?Sultan? by Rajinikanth?s daughter, Soundarya, is also expected to hit cinemas in 2008.