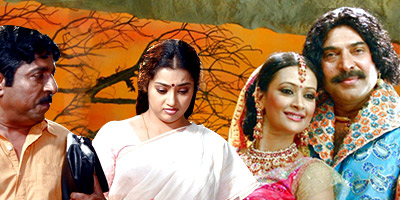 It`s official Rajnikanth is going to do a quick movie called Kuselan before mega Robot. Rajinikanth’s Kuselan is going to be a remake of Sreenivasan‘s Malayalam “Katha Parayumbol”

Here is the Katha Parayumbol story

Sreenivasan plays a character that is outstanding only in its ordinariness. But he elevates it to a class of its own. His is the role of Balan, a barber in a village fighting modernisation in his own antiquated ways.

Balan(Sreenivasan) can’t afford a revolving chair, now an essential for his trade. His tools are out-dated and he cannot afford to replace them. And no authorised agency will lend him money because he refuses to grease the palms of the powers-that-be.

Balan is a middle-aged man with 3 kids in school. He had eloped and married his sweetheart and settled in this hilly village, far from the urban world. He is an object of ridicule for all and sundry. His kids are nearly thrown out of the school for non-payment of fees. His wife has no idea where their next meal will come from.

Balan’s only defence mechanism against the harsh existential realities is his wit and his barbed tongue.

But, all this changes when superstar Ashok Raj (Mammootty) makes an appearance in the village for a film shoot. Ashok is supposedly Balan’s childhood friend. So the whole village converges around Balan seeking his favour for a meeting with the superstar. Balan is reluctant to approach the star thinking that Ashok may have forgotten his lowly friend in these intervening years.

The ultimate clincher for this film is its script. Authored by Sreenivasan, it is so layered that every frame has a comment to make about the world and every line of the dialogue on the mores of the society. The craze for celebrities and the problems of leading a principled life are discussed without being preachy or in-your-face.

Mammootty has the dignified presence of a real star and his aura and the mythical persona that surrounds him give a lifelike feel to the character of Ashok Raj.

There are other characters that fill up the space to present a microcosmic universe. The moneylender played by Innocent and the pseudo-intellectual poet played by Salim Kumar are hilarious. Meena plays the well-etched character of Balan’s beautiful wife.

‘Katha Parayumbol‘ has Sreenivasan‘s stamp all over it, and can claim to be one of his best.

So… P.Vasu will do a slight change in the story with the same theme of ‘Katha Parayumbol‘ for Superstar Rajinikanth.