For the first time, Large Size cutouts of Rajinikanth are going to be erected in US cinema theaters that are going to screen Kuselan. These cutouts are being made in India and will be shipped to the United States ( about 25 feet in height). 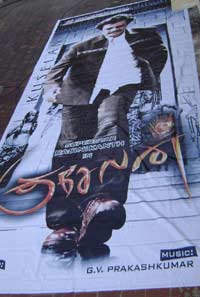 Rajnikanth is back with his new film, Kuselan. A remake of the Malayalam hit Kadha Parayumbol, the Tamil film will release on July 31, the same day as its Telugu version, Kathanayakudu. It is also being remade in Hindi as Billo Barber, starring SRK.

Next post: Kamal Haasan’s Marmayogi to Kick-Start in Sweden