Rajini in P.Vasu’s direction before “Robot” ? 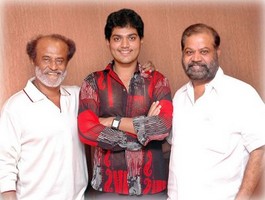 While Superstar‘s “Robot” (officailly anounced) is expected to take at least 2 years to complete, Rajinikanth?s is considering a quick project with director P. Vasu, which may be a remake of recent Malayalam film ?Kadha Parayumbhol? starring actors Mammootty and Sreenivasan.

‘Kadhaparayumpol‘ with Srinivasan’s story is running successfully. This film has Srinivasan in the role of a saloon owner and Mammuty as a stuperstar.

Last week Srinivasan showed this film to Rajini. Rajini and Srinivasan are colleagues from Film Institute and good friends.

The Tamil rights for this film are acquired by Balachander‘s Kavithalaya. It is learnt that in this film, Pasupathi would do Srinivasan‘s role and Rajini in Mammuty‘s role.

No official announcement yet.