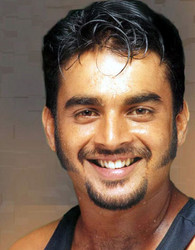 Madhavan‘s “Evano Oruvan”, featuring sangeetha as his wife and Seeman as a police officer with his own production company Leukos Films. There are no songs or fights in this film.

Speaking about his film to the press, Madhavan said “to pay fees and produce a film is a pain, I’m not even thinking of any more productions. I do not aspire to become a director either“.