Do you remember K T Kunjumon of Gentleman Films International ? He is the one who introduced director Shankar in Gentleman movie in the year 1993. 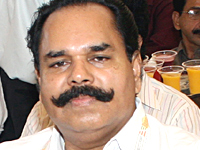 After a big gap, Kunjumon is ready to make his comeback. Very soon, he is ready to produce a movie which will be directed by Balaji, a newcomer from Mumbai and Malayalam heroine Meera Nandhan will be doing the leads.