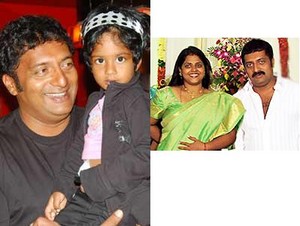 One more petition at the family court and this time it is from Actor Prakash Raj. Last time Yuvan Shankar Raja and wife Sujaya was granted divorce.

As there are too many differences of opinion between them, Actor Prakash Raj has finally decided to go for a divorce with wife Lalithakumari, former Kannada actress and sister of ‘Disco’ Shanti.

According to reports, Prakash Raj has filed a petition in the Egmore family court in Chennai on 20 March 2008 seeking divorce from Lalithakumari.

Prakash Raj has requested to the court that he will have custody of his daughter with whom he is extremely close(see pic).